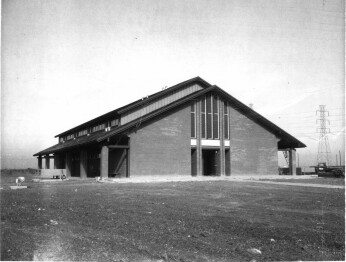 The “Sagemont Story” originated in the heart and mind of God long before He began to reveal it to the pastor and the people of the First Baptist Church in Pasadena, Texas. The year was 1966. Under the pastoral leadership of Dr. L.D. Morgan, this mission-minded congregation had established a new church in every section of their growing city. Their attention turned to a newly developing section of Southeast Houston called “Sagemont.” They purchased 5.46 acres of land and began construction of a new building. The total cost of the first project was $160,000. The First Baptist Church immediately began to seek the guidance of the Holy Spirit as to who would be invited to be the pastor of the soon-to-be-completed Sagemont Baptist Chapel. Their search took them outside of Sulphur Springs, Texas, to John D. Morgan, who was pastoring the Posey Baptist Church in that dairy community. An East Texas county seat church had been talking to this young man and his wife, Beth, about coming to their well-established and strong church; but the Lord had other plans. After much prayer, the invitation was extended to Brother John to come and pastor this new mission – an invitation that he prayerfully accepted.

No one had any idea what God was about to do. Immediately, the church began to grow; and hundreds of people were inviting Jesus into their hearts and lives to be their Savior and Lord. From day one, missions and evangelism were priorities. The pastor challenged the church to be, and make, disciples and let God build His church. Individual members began to respond to the personal call of God upon their lives to go into full-time gospel ministries. Today that number exceeds 300 people who have been licensed or ordained by Sagemont Church. There was not a question in anyone’s mind that God was up to something extraordinary. The unity and commitment of the church family to be in one accord allowed families to experience, and a community to see, love and grace in action.

The “Sagemont Story” began to be told not only in Houston, Texas, but around the world. Additional buildings were built as needed; and the church debt, like most churches, began to grow. But in the middle 1970s, God spoke to our Pastor in a clear and powerful way that Sagemont Church was to cease their borrowing, get out of debt ($600,000), and move forward on a cash-only basis. The question was, “Can God today find a people who would trust Him to supply the need by financially blessing the people instead of leading them to borrow from the world’s monetary institutions?” Could God still do what He did in the days of scripture writings – “Supply all the need?” The people of Sagemont Church unanimously said, “Yes, by faith we believe God can be glorified!” and the world was shocked to see a church where offering plates were not passed, pledge cards were not signed, and no money would be borrowed to do God’s work.

Miracle after miracle began to take place. The debt was paid in 14 months; and just a few months later, 300 families gave their total income for 40 days to the Lord – over $1,000,000 was given to start building a new auditorium. As the building was built, another $1,500,000 was given to complete the new auditorium. Mission ministries grew faster than ever. Sagemont Church began to help hundreds of other churches come out of bankruptcy and foreclosure. The ministry of helping other churches continues to this day.

If the church needed space, the Lord would provide. Theaters, a grocery store building, and a drug store building were acquired in very unique ways. When the church desperately needed more land, 25 acres were purchased for $1,060,000 cash in 13 weeks; and then 25 adjoining acres were given to the church from the estate of Mr. Harry Holmes by his wife, Carolyn. The church was overwhelmed by the miraculous way God provided through this family that were not members of Sagemont but believed in what God was doing here.

All the while, as the church grew to nearly 16,000 members, so did the opportunity to minister to our own family and to our watching world. Bible study and fellowship opportunities abounded, ministry to children and students dramatically changed, music styles shifted, and budgets grew. The Helping Hands Ministry began to take care of the physical needs of church members and people in our community, and the Missions Ministry began a number of new hands-on ministries in our city, state, nation, and world.

But at the turn of the century, the church faced a major decision. Would the church build a much needed, more functional auditorium or a building to provide for the many children God had sent our way? Again, the unanimous decision was to take care of those our Lord says are the greatest in the kingdom of heaven. A $12,500,000 Children’s Building and parking expansion was paid for in cash. God met the need, and missions kept growing.

The numbers are impressive, but what is more important is that God was being glorified!

Today you can see God’s provision for Sagemont’s future in the worship center and adult education building opened in 2012. In the program known as the “Living Proof Project,” we once again saw God work miracles in the lives of Sagemont families as He provided the $30 million needed to complete the building. But Sagemont’s ministry is not about building programs – it is about seeing lives changed by the gospel of Jesus Christ.

God's hand remained on Sagemont Church when, in 2019 after 53+ years as pastor, Pastor John Morgan announced his intentions to step down as Senior Pastor and the search began for a new leader for the church. In March of 2020, just as the world shut down as a result of the COVID-19 pandemic, the Pastor Search Team announced that Dr. Matt Carter was their unanimous recommendation to become the next pastor of Sagemont. Matt Carter is the founding pastor of The Austin Stone Church in Austin, Texas, where he led the church to be one of the fastest growing and most missional churches in America since its beginning 2002. Pastor Matt was extended the call to come to Sagemont on May 17, 2020, and the Sagemont Story, Part 2 began!

Watch or Read More of The Sagemont Story