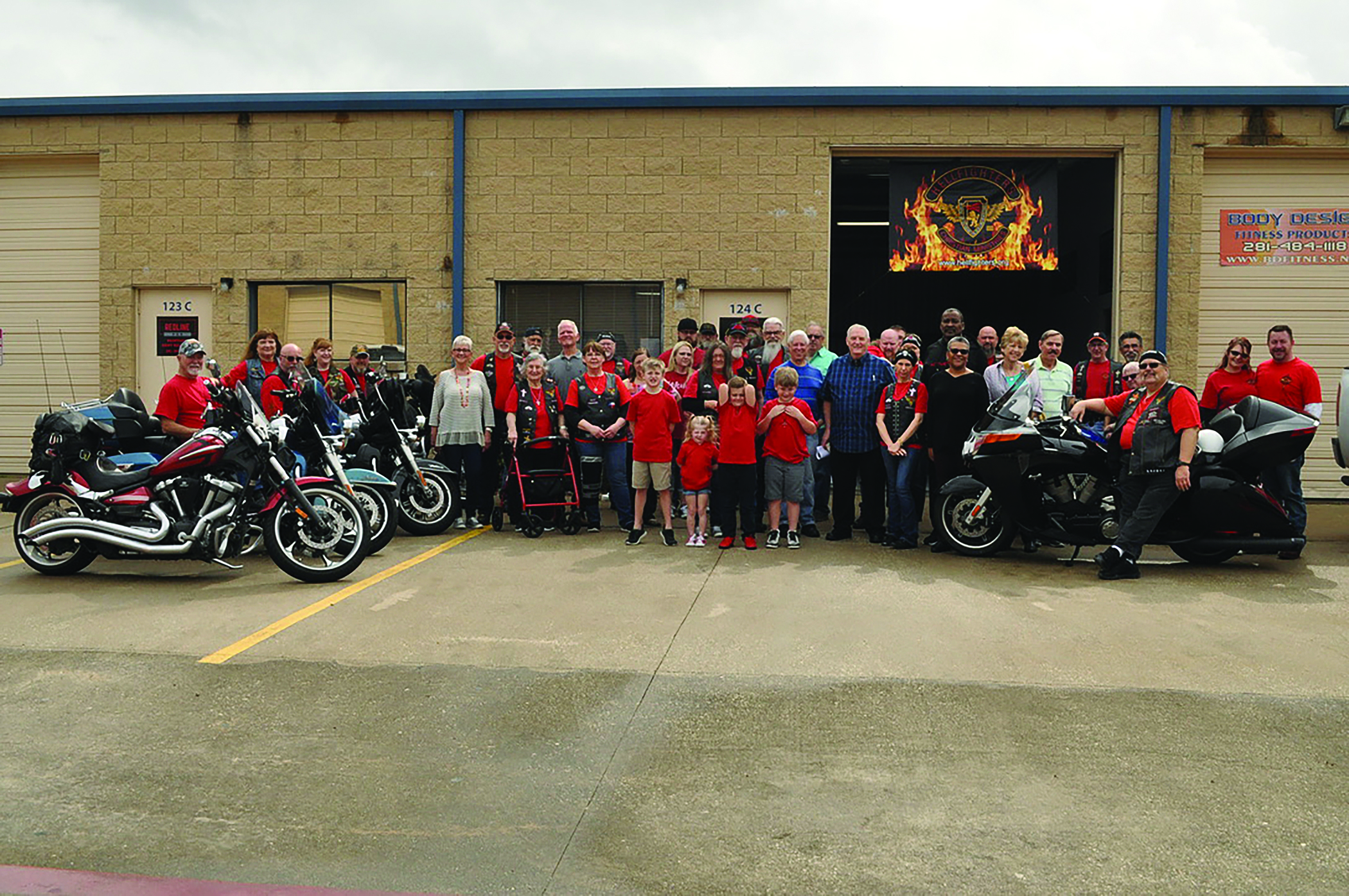 We now have a Clubhouse!

God has provided us with our own Clubhouse. We have worked very hard to get it ready for the Open House on February 23rd! Thanks to Sagemont Church and its generous members’ and friends’ support and prayers, we now have a home base for our ministry.

Our new address is:

A month after this announcement was sent out, over 125 people attended the Open House for Southeast Houston Hellfighters’ (SE Houston HF) Motorcycle Ministry.  Fifty percent of the attendees were from other HellFighter units, including all three Texas units as well as two units from Mississippi.  The other 50% came from the local community, including many from Sagemont Church.  Joe Massa, Sagemont Church member for the past 25 years, shared his first hand account of the SE Houston HF Open House, after attending with his wife, BJ Massa, who took photos for this article.

David Cohoon, Sagemont member and President since 2015, is very excited because his Houston chapter of the HellFighters’ (HF) Motorcycle Ministry is having its grand opening today for their new HF Clubhouse!  This is not your ordinary motorcycle club.  This gang has one major agenda…to lead lost people to the Lord and Savior Jesus Christ!

By 10:00 am the HF club members put the final touches for the grand opening just as guests and friends began to mill around the open garage door in the business park located off the Gulf Freeway just South of Beltway 8.  A dozen big, beautiful motorcycles were parked outside the front entrance.  Inside the neatly organized facility, you could feel the excitement in the air and the presence of the Holy Spirit.

Inside the multipurpose building there are shelves with large plastic totes labeled with dozens of kinds of toiletries and other necessities that the club puts together for their outreach to the growing number of homeless people living in the area.  The group rides to Galveston once a month and ministers to the homeless there.  The HFs don’t just give handouts; there are also plastic totes full of tracts that they use to help them lead people to the Lord.  They plan to ride up to the Michigan/Canada border in June and then next year to Washington DC to pray for our politicians in front of the White House.  Each year the group rides up to Sturgis, South Dakota to minister to the biker community during the largest motorcycle rally in the world.

The HFs had been without a permanent club house for over a year and now they plan to utilize this space to the fullest possible extent for the Lord. David spoke about all the things he intends to use this facility for. There is a men’s group starting in March and plans for a women’s group to follow.  A prayer box is planned to be put just outside the front door.  The facility will be open to other groups for ministry meetings also.

Sagemont member and HF club member, Art Hecker, AKA “Snickers” (everyone has a road name), tells how the HFs hand out water bottles at the Sturgis Motorcycle Rally and witnesses to people in the process. He stated, “It’s amazing how the Lord will give opportunities to ordinary people if we just make ourselves available, and that is exactly what the HellFighters do.”

You don’t have to be a motorcycle rider to join this club.  Jeanette Rodriguez, AKA “Granny R”, is David’s 93-year-old mother and she fits right in with her black leather vest.  She explains that she is a “Foot Soldier” member of the club.  Foot soldiers perform important tasks like going out on outreach trips, helping organize functions at headquarters, pulling the support trailer on motorcycle trips and just hanging out with this really cool and godly group of people.  Everyone is welcome here and the HF will find a place for anyone who has a heart for the Lord.

Raul Yzquierdo, AKA “Primo,” the Sergeant-at-Arms, is a quiet man who serves the Lord in a mighty way.  Raul appears like a tough guy with an intimidating look, but he has a gentle speech and has an amazing heart for the Lord.  He leads the HF’s prison ministry.

There was a bit of a stir, when a silver-haired man with a ZZ Top beard arrives.  It’s Mike Grubb, the national president of the HF club from Laurel, MS.  After greetings from fellow members, Mike explained in the clearest, most genuine way what the HFs are all about.  Mike said, “It’s amazing how little you have to do to minister to other people.  All you have to do is make yourself available and God will do the rest…All we are is the hands and feet of Jesus.”  I listened in amazement as Mike shared his testimony that was like so many who now called themselves HF.  As a result they can go into desperate, hopeless places and feel comfortable showing Jesus’ love to people in some pretty tough places like the homeless camp under a bridge and give the hope of Jesus Christ to people who really need it.

David then led a group prayer and blessed the food, pulled pork and sloppy joes, inside the newly remodeled office space.  The food was honest, simple and filling, just like the club members.  No fluff here, this is the ultimate man cave, but you can tell thoughtfulness was put into the many cool posters and decorations hung on the walls of the clubhouse.   It’s the kind of refuge that one could just hang out in and feel safe and comfortable and serve the Lord at the same time.

Then everyone gathered outside for a group picture.  “Snickers” tells my wife, BJ, who was the photographer, to include two particular motorcycles in the picture.  Snickers happily announced, “Now these are some real motorcycles,” he was immediately heckled and told to get in place for the picture.  The camaraderie of the group speaks of their closeness.

After the Massas left, another important guest arrived around noon, United States Congressman Randy Weber from the 14th district of Texas. He spoke to the group for a few minutes and then prayed for the HF clubhouse as well as for those in attendance. David stated, “It meant a lot to me that U.S. Congressman Weber came to the open house and prayed for us.”

The founders of Hellfighters International, Richard Headrick and his wife, walked up to where David and several of the SE Houston HF sat at Sagemont Church during the first service on Sunday to support the Newest HF Club House.  David smiled, “Unfortunately, their flight from Mississippi was canceled due to fog on Saturday, but we were so excited to get to show them the clubhouse the next day after church.”

Despite not having a clubhouse for 15 months and having to work out of a temporary, packed storage unit, the SE Houston HF stayed very busy in 2018.  David explained, “Jesus was on the streets and that is exactly where the HF ministry is … on the streets.  We believe in doing what Jesus commanded us to do which is to go out and preach the gospel to all creation (Mark 16:15).  That’s our battle cry!”  With seven dedicated HF members and a handful of HF supports these 2018 numbers were accomplished:

Now that the SE Houston HF’ Clubhouse’s renovation is complete, they are, in a sense, revving their bikes, ready to go.  The front office area will be used for meetings and gatherings and the warehouse space is for supplies and equipment. David explained, “Meeting at our HF Clubhouse is a way to get the biker community to come in and hear God’s Word and not feel like they are walking in to a church.”  He quickly added, “The clubhouse is also open to EVERYONE!  We want to use this HF clubhouse for the community of SE Houston.  If you need someone to talk to, listen to and pray for you we will do that.  Just come in.” Their plans include the following activities:

One reason David joined the SE Houston HF in 2010 was because he wanted to go back to his friends in his old biker lifestyle and tell them what he found.  David smiled, “I wanted to tell them about the good news of the Gospel.  Like our pastor, Brother John, always says, ‘The Good News of Jesus is only good news if it gets to them in time!”  We sit around on our rear ends and don’t get up out of the pews then it is not going to get to them in time.”

David leaned back in his chair and shared an analogy of the urgency he feels for the biker community.  “Remember that bridge in Italy that collapsed on the highway in August 2018?  Right after that happened I was in Sturgis, SD for the big bike rally.  We stayed at a church that is right on the highway leading into the city.  At five in the morning I had just gotten up for the day and stood watching as hundreds of motorcycles passed by riding fast up and down the highway. I struck me when I thought:  What if they were all headed toward a bridge that was collapsed?  Wouldn’t anyone run out there and yell, 'Stop, Stop, the bridge is out! You are all going to die!’”  He paused for a moment and then continued, “We as Christians know that the bridge is out because of Satan and sin, and if you are lost, you will drive off that bridge to your death and will go to hell. If we don’t get out there and yell, 'Stop, Stop, you are going to Hell! Stop and let me tell you about Jesus because only through Him you can your life be saved!’  I remember thinking this and knowing that was exactly why I became a HellFighter.”  David ran a hand across his face and neatly trimmed goatee as he concluded, “If we, Hellfighters, don’t do everything in our power to stop them on the ‘Highway to Hell’, as ACDC sang, then who is?  Most people don’t care for the biker community and don’t want to get involved because they are intimidated by them…but we aren’t.”

David is the first to point out that his home church, Sagemont Church, has been a huge support to the SE Houston HF motorcycle ministry.  He stated, “We are so thankful for all the love, prayers and support that we get from our church family.  I have to thank Sagemont’s ministers and staff because they get behind us and support us.  We want our brothers and sisters in Christ to know that they are helping us to share the Gospel out on the streets.  If it wasn’t for them we couldn’t do what we are doing now at the level we are doing it!”