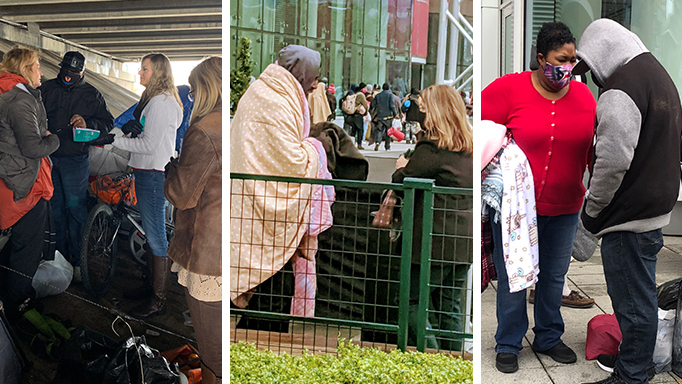 Valentine’s Day of 2021 will be unforgettable as Winter Storm Uri arrived in Houston that day. But as Sunday morning worship services ended and most went home to prepare for the storm, a few Sagemont members prepared to embark on a mission to serve Houston’s homeless. The temperatures dropped that afternoon as Karen King, Nejwa Wilson, Harry Crawford, and others set out to help these most vulnerable citizens of Houston prepare for the cold weather that was rapidly chilling our city.

When the weather forecasts came into focus during the week leading up to February 14, a plea went out to the Sagemont family on Friday for a blanket donation drive to be held Sunday morning. As the church assembled for worship that day, hundreds of blankets were piled up in the Lobby outside the Worship Center. Organizers of this last-minute effort were blown away by the generosity of the church, and that Sunday afternoon they took the blankets to several locations in the Houston area.

One car load of blankets and jackets was taken to the Galveston Central Church’s shelter/warming center. When the church pastor asked how Sagemont knew about their shelter, Laurie Lindquester shared how research led our group to his church. He responded that it renewed his people’s faith in others when they saw the kindness extended from Sagemont.

More blankets went to the George R. Brown Convention Center, which was serving as a shelter during the cold weather. The American Red Cross accepted the new blankets and distributed them inside the building. The Sagemont team stood outside the GRB distributing other blankets to many who were standing in line waiting for the shelter doors to open. They were able to talk and pray with several outside. While ministering to people outside the GRB, other kind-hearted Houstonians gave their own donations to Sagemont’s team, allowing them to reach out and minister to more people that afternoon.

Nejwa Wilson shared the story of a man she met in the line outside the GRB. The man had lost his wife recently to COVID, and as he wandered around downtown and sat down on a bench to rest, he found a book about Jesus that someone had left on the seat next to him. He read the book and later talked to someone else who led him to Christ. Meeting and praying with Nejwa, who reminded him of his wife, was a confirmation to him that God is in control and has a plan for him. Nejwa said, “I know the Lord intersects us in these people’s lives. That’s why it’s so important for us to keep going out.” She and her family regularly feed and minister to Houston’s homeless.

Additional blankets were taken to various underpasses where homeless tend to gather. The EMBRACE iCONNECT class, taught by Harry Crawford, had already been ministering to a group of homeless people at an underpass on I-45. Class members had led two people to the Lord, and they attended Sagemont on Valentine’s Day. Those two joined the class as they went back to the underpass to help distribute blankets and minister to others there who could not or would not move to the shelters. The EMBRACE class also brought in a food truck to serve a hot meal, and Sagemont member Chandra Ranne donated some Bibles that were distributed there.

This was an easy way for Sagemont to minister to many people. It did not require weeks or months of planning, but only a willingness to give, pray, and go. Karen King noted, “It was a last-minute idea, and I still can’t believe how many blankets we received. Our church is extremely generous.”

Both Karen and Nejwa commented on the excellence shown by the Sagemont family in the donations. Nejwa said, “Everything we do as a church is done in excellence, and this was too. People brought good things to give away. Others might bring the leftovers, but Sagemont brings the best. It is seen and noticed by others and by God, and it makes a difference.” So, to all who participated either by donating or by going with the teams to distribute, THANK YOU for being living proof of a loving God to a watching world!